"The Strasbourg Legacy" by William Craig 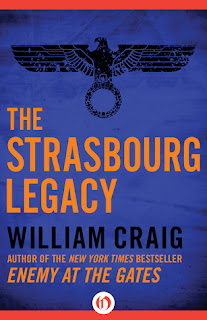 First published in 1975, this book is a chronicle of the remnants of the Third Reich and their quest to not become irrelevant. The book cover is really attractive, showing a Reichsadler (imperial eagle) with its wings spread, as menacing as when it was being utilized by the Nazis. This is what pulled me into reading the story, topics of World War II have achieved a legendary status, and I was hoping that this would follow suit. I don't think that was necessarily achieved, but more on that a little later in my review.

If you are the reader of this book and lack a basic knowledge of the late years of the European front of World War II, the East Germany/West Germany split, the ODESSA, or even the actions of the infamous Shin Bet, then you should make some research before opening this book. The author jumps into his narrative, interweaving these topics without much background explanations. While I have read much about this time period, at times I found myself pausing my read just to consult online references to put things into perspective.

Taking place in the 70s, the same period it was written, we read the story of a power struggle of sorts with "escaped" Nazis that want to create government instability, gain some sort of power, and even pave the way for a Fourth Reich. Getting involved in all this mess is an American agent named Matt Corcoran, who finds himself peeling the layers of multiple conspiracies, treacherous "allies," and power hungry political machines.

At just 183 pages it is a rather small book, it did not take much time to get from cover to cover. However, even for such a quick read I found myself struggling to get into the story. I just could not connect with the characters or the storyline. Maybe it is because of a disconnect between my generation, and the one this was written for, but the words just did not flow well for me. It was not until the books final pages that I felt some sort of interest for what was "coming next." The ending is fun, and shows a quite elaborate plan and how the heroes are able to work around it.

This is by no means a bad book, it is just one that is not well suited for everyone.

** I received a free copy of this book as an ARC by the author/publisher in exchange of a honest review.
Posted by UPR Silente at 6:45 PM