"The Maze Runner" by James Dashner 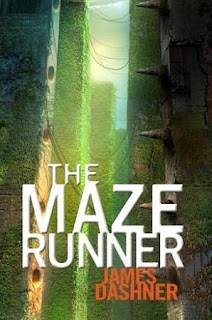 I first heard of The Maze Runner when the film started getting some publicity last year. Getting on the hype plane I purchased the book and started reading it, however because of my load of work and school abandoned the read shortly after. The movie came out, and I had some basic knowledge, but didn't get any book "spoilers" because, well, I fell asleep and basically missed the whole thing.

So a couple of days ago I had a reading gap so decided to restart this book. The concept is not new, again we are introduced to a futuristic dystopian society that has a group of young adults go through a series of trials and tribulations that will make or break them. The device in this case is The Maze, and in the middle of it is The Glade, where our characters live.

From the beginning, the pieces of the puzzle are scattered. The characters themselves don't know much about their purpose, and the reader is left to start filling in the blanks as Thomas is introduced to this way of life. This character development is what lowered my rating for the book. While I understood the behavior of many of the characters, I failed to make a connection with them. Even the ones that are meant to be likable, like Thomas' tour guide Chuck, seem forced and fake.

What saves this book is the mystery of what exactly is the maze, which its plagued with annoying critters knowns as grievers. All it took is one description of this mechanical/organic hybrid to make me feel disgusted, but at the same time the mere description of how they were supposed to be made it real hard to suspend disbelief. But regardless, these creatures are the main antagonist in the search for answers.

As a series of events unfold, everyone of the kids in The Glade must face their fears and are forced to forge the path to their own salvation. The end, with its own plot twist, is not a big shocker.

While not as good as The Hunger Games, or even Divergent, The Maze Runner provides some good entertainment if you can get pass the dialect that the characters insert into their conversations. I will continue reading the series and watching the movies. Many questions are still in need of answers.