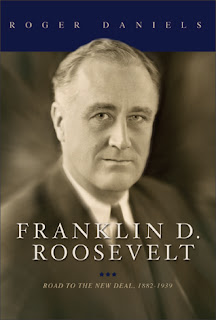 If you are looking for a detailed study of Franklin D. Roosevelt's rise to prominence you found it. When I first started reading this book I had but just the most basic knowledge of Roosevelt's political career. After reading this I can tell you that I have learned the origins of many reforms put into place that we still see today.
FDR had a charisma that made his physical limitations seem like they were not there. We all know how polio paralyzed him, but Daniels research lets us see how Roosevelt handled this: head on and sometimes with a smile in his face. We see countless stories of him going on with his daily life, aided of course, but not being self-conscious. In a way it is inspiring, this man bound to a wheelchair or crutches was still capable of having this powerful aura that captivated a nation. At the same time this affliction gave him a purpose, a side fight that eventually led to get America get rid of infantile paralysis.
But this book is not entirely about his personal affliction, this book is also about politics. We see a man that rose through various positions in government until eventually becoming president in one of the most precarious economical times of the last century. The back story of the Great Depression seems like the age-old formula of disaster that we are familiar with. Banks making unwise loans, unemployment, political conflicts, all of this made worse by the absence of financial regulation.
Enter the New Deal, which the book dedicates most of its content. Roosevelt initiated many programs that helped started turning the country around, and that nowadays we even take for granted. Regulation was established, with the Securities and Exchange Commission, the unemployed were given not only sustenance but a job to feel useful, the National Labor Relations Board got a head start, child labor was put under control, and the future of these working-class citizens was safeguarded with the introduction of Social Security.
Now, not all is a fairy tale. We see the politician side of FDR, you can say the darker side of things. Like the author says, even the best of presidents "do many things that are not pretty." Some decisions were not fair, and he even turned a blind eye to the evils of segregation. As politics go, alliances were made and broken, people were betrayed, but it's all in the day's work for a president.
The last chapters start to show the shift from the New Deal to what eventually be World War II. It is rather interesting to see how the US reacted to international politics back then. It was a given that intervention in international affairs was not public policy, but after World War II this all changed.
And then it ends. While the title clearly states the scope of this book, I was hoping for a smoother finish. I had to double check that I was truly done, as it literally just stops.
One thing to know is that this book is MASSIVE. I would read for hours and feel like I was still scratching the surface of it's contents. Daniels did not spare a detail when compiling this piece, which at times makes the read somewhat hard. You not only get the details of FDR, but those around him. I would certainly recommend this book to anyone that has a passion for presidential politics. If you are just a casual reader of politics, then I will recommend you skip this book.

** I received a free copy of this book as an ARC by the author/publisher in exchange of a honest review.
Posted by UPR Silente at 8:59 AM